PROMAX supports the deployment of Ultra HD in France

The Future TV Days 2015 exhibition organised this week by TF1 has been the opportunity for the French satellite broadcaster FRANSAT to present a new distribution solution for Ultra HD channels based on the PROMAX CompactMax headend.

For nearly one year the satellite operator EUTELSAT has been broadcasting two Ultra HD channels. One of them, broadcasted through the FRANSAT platform for French TV viewers via EUTELSAT 5 West A satellite, has been used mainly for demo purposes but also for major sports events like the Roland Garros grand slam for instance.

PROMAX had the honour to contribute to the Future TV Days event by providing a CompactMax transmodulator which allowed to receive the DVB-S2 signal from the FRANSAT satellite transponder, unscramble it using an official FRANSAT Pro CAM module and remodulate it into a DVB-T2 terrestrial multiplex.

A 4K second generation TV was used to show the picture of the DVB-T2 signal to the visitors. The reception quality of both DVB-S2 and DVB-T2 signals were easily tested using an HD RANGER 2 meter. 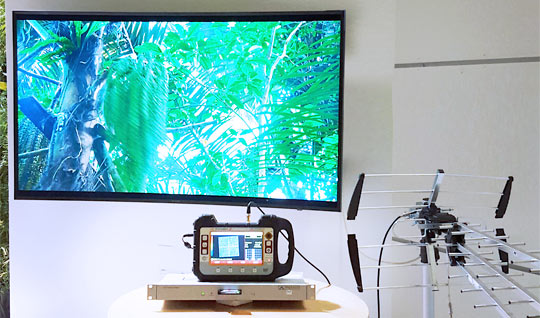 Ultra HD provides an unprecedented viewing experience, with a higher picture quality, a broader range of colours, higher frame rates and greater luminosity. This new technology has partly been possible thanks to the new video compression standard HEVC (High Efficiency Video Coding), much more efficient than the MPEG-2 and MPEG-4 H.264 compressions used until now. However, despite the HEVC high efficiency, Ultra HD pictures still requires very high bitrates that can usually only be transmitted using second generation modulations like DVB-S2 (for satellite transmissions) and DVB-T2 (for terrestrial transmissions).

The CompactMax receives satellite channels and converts them to digital terrestrial standard in order to be retransmitted efficiently and at an inexpensive cost per channel. The quality levels of the terrestrial signal at the output are so high that signal can be broadcasted by a small emitter.