The RANGERNeo Lite field strength meter now incorporates a specific tool for LTE called LTE Ingress Test. With this tool the equipment can measure the MER of a DTT channel, which could be altered by a LTE transmission, and evaluate the effects of installing an LTE filter. 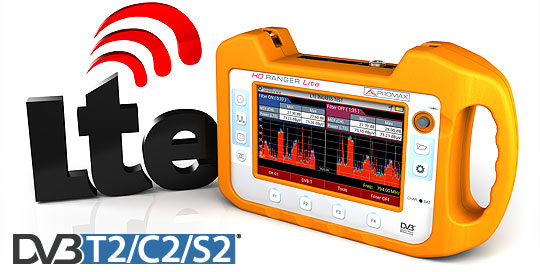 The RANGERNeo Lite field meter is the most inexpensive analyser that incorporates DVB-T2 and a specific tool for LTE.

How to use the MAX hold and marker in the spectrum analyser of any RANGERNeo. Recommended reading technical article.

This is the same tool that already have the meters in the upper range of the same series, RANGERNeo + and RANGERNeo 2. From now on, the new manufactured meters include this tool and for the RANGERNeo Lite meters already in operation this tool can be added by downloading the latest update at the PROMAX website.

LTE Ingress Test. How to use it?

Thanks to the Max Hold and the Marker function in the Spectrum Analyser mode in the RANGERNeo series, a first idea of the influence that the LTE signal may have on the TV channels can be acquired. 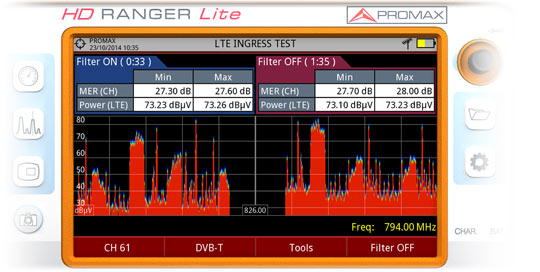 The RANGERNeo Lite field meter has now a specific tool to simulate the attenuation of a LTE filter over the band and a specific channel.

The LTE Ingress Test tool shows on screen the spectrum of the LTE-800 band (776-876 MHz) to know the level of 4G (LTE) activity. On the screen are also shown the power measure of the LTE band and the MER of the channel that we suspect is being interfered. These measures are displayed filtered and unfiltered simultaneously. If when the LTE filter is enabled the MER measure improves, then becomes clear the interference effect of the 4G (LTE) signal over the channel. Otherwise, we can reject the LTE signal as the interference source.

In this way, the installer can check if an installation needs a filter to reduce the effects of the LTE signal and if it will affect the reception quality of the television signal.

For more information about LTE, watch this video on our YouTube channel: