The HD  RANGER meters ready for the Digital Dividend (LTE)

LTE (Long Term Evolution) is a standard for mobile data connection, commonly called 4G, with up to 44 frequency bands assigned. These bands are located in the radio spectrum between the frequencies 698 MHz and 3600 MHz.

Although LTE standard is applied virtually worldwide, each country and each operator chooses the bands and the individual technological aspects of its implementation.

Why LTE is a problem for television installations?

As TV installers, LTE worries us because of its ability to generate interferences over the TV signals, especially in those cases where an LTE repeater is located in the surroundings of our receiving antenna. Specifically, the band 20 in the LTE (also called LTE-800) corresponds to frequencies between 791 MHz and 862 MHz, and it is one of the bands that will be used in Europe.

Currently, TV operators are restructuring some UHF channels in order to release the frequencies corresponding to the band LTE-800. These channels are those between 61 and 69 inclusive. This process is called “Digital Dividend”. After migration of frequencies has been completed, the mobile operators, which own the concession, will begin to transmit LTE signals.

Detection and correction of LTE interferences

Fortunately, all the PROMAX field strength meters in the HD RANGER series have tools to detect and correct any interference caused by LTE / 4G mobile phone signals.

The interference caused over DTT signals by LTE can be produced because of near 4G mobile telephony base stations, as well as the proximity of mobile devices that use this band. The TV reception installations, especially in the channels near to LTE-800 band, can be protected from interference with the installation of a filter to reject the LTE band. Such filters are easily found in shops, are easy to install and have a reasonably high attenuation for such interfering signals.

Step by Step: Solving the case of a LTE interference with any HD  RANGER field strength meter

Now we are going to simulate a case of interference and how it can be solved with a field strength meter of the HD RANGER series.

The best option is to start measuring the highest power of LTE signals in the band between 791 MHz and 862 MHz. This frequency band comprises a first block for downlink with 6 channels of 5 MHz bandwidth each, and a second block for uplink with the same distribution. See this spectrum in the following figure: 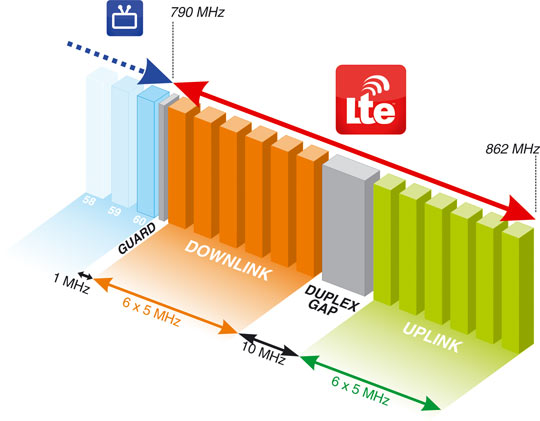 Picture of the terrestrial band occupied by LTE frequencies.

We will use the Spectrum Analyser mode with the Max Hold and Marker option. Now the step by step explanation. 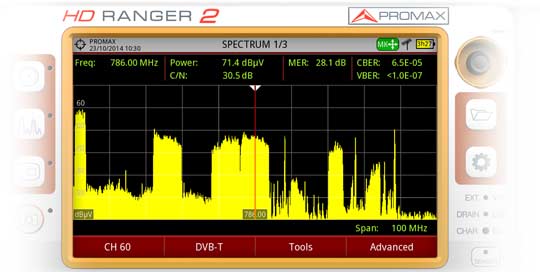 Pointer over the spectrum at channel 60 in the terrestrial band.
The spectrum band reserved for LTE is visible on the right. 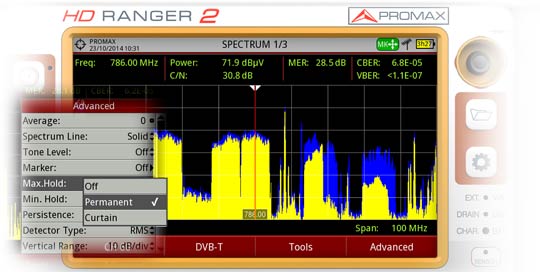 Max hold on the signal. The maximum power of the spectrum is traced in blue,
behind the real-time spectrum (yellow). 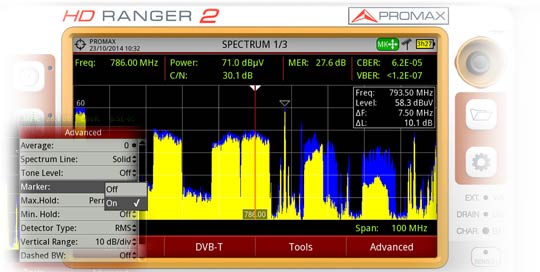 Marker enabled and placed in one of the LTE channels, at the frequency 793.5 MHz. 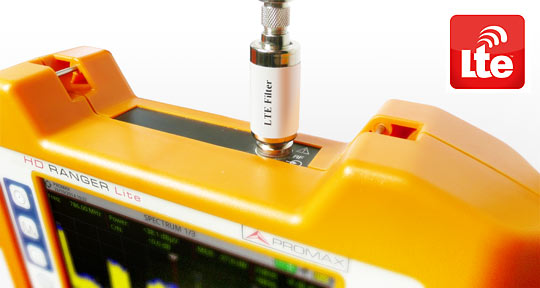 To be clarified that these filters, internal or external, cannot completely remove the LTE band signals. Especially for the TV channels close to 790 MHz, where is the end for the current UHF. If we are close to a LTE station with low downlink channels, (as in the example) a filter cannot be a sufficient solution.

Other options to better mitigate the LTE signals can be considered, such as a change in the location of the TV antenna or a passive shield in the way between the two antennas (TV and LTE).

As an additional feature, the RANGERNeo equipment have a specific tool for LTE, called LTE Ingress Test. With this tool you can measure the MER of a DTT channel, presumably affected by an LTE signal, and evaluate the effects of enabling an LTE filter.

Specifically, in the screen of this tool you can view the spectrum of the LTE-800 band between frequencies 776 and 876 MHz. In the measurement window is shown the minimum and maximum MER for the tuned TV channel (the one we suspect may be affected by a possible interference of a LTE signal) and the minimum and maximum power in the LTE bandwidth. The measurement can be done with the filter on and off.

By this way, the installer will check if the installation of a filter will absorb the effects of the LTE signal and if it affects in a positive way the quality of reception for the television signals.

With these options, the RANGERNeo field strength meters are the ones better prepared to deal with interference problems that may arise with the beginning of the LTE emissions.

To learn more about LTE you can watch the following video on our YouTube channel: