For PROMAX, is aware that to be chosen as a supplier of measurement instrumentation is a great responsibility. When a customer purchases one of our products we want him pleased with it and also long years of productive service. Therefore, it is not enough for us to sell the best product, but also our R + D department works constantly to improve and add new features to our equipment, in order to keep them updated according to the latest trends in telecommunication field.

Updates for HD RANGER series are free download via the NetUpdate updating software, which is available on our website. A new update is now available, and among several improvements it provides a functionality adapted to one of the latest developments in television broadcasting.

How to detect the Interactive Television with the field strength meter?

This new feature in the HD RANGER field strength meter series allows you to detect if the locked channel contains interactive television services. To access this information first lock a TV channel and then, in the TV mode go to the screen where service data appear. If the program has interactive services, in the Application type field will show the standard: HbbTV, MHP, MHEG, etc. 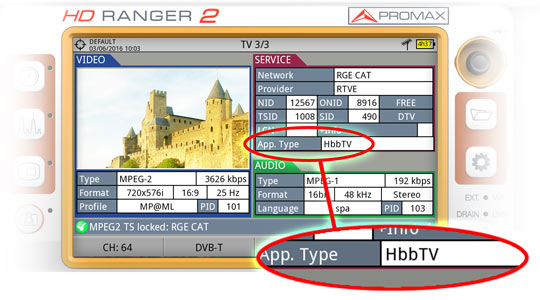 The most widespread standard is the HbbTV also known as Hybrid TV. For people who do not know much about the hybrid television we are going to give a brief explanation.

What is Hybrid TV or HbbTV?

The HbbTV (Hybrid Broadcast Broadband TV) is a pan-European standard which basically consists in combining the traditional reception of programs through digital TV (via RF aerial or satellite) with television programs on-demand and other interactive services received through the Internet. The HbbTV is a standard that tries to harmonize all the necessary elements to develop universal applications, with no barriers between the wide variety of available devices.

When tuning a channel containing HbbTV, while you are enjoying your favourite TV channel received by conventional DTT, the receiver will propose other options available via the Internet. If he chooses one of them, the viewer will access on demand to that content, getting it to the TV via the Internet. Besides being able to view video on demand, other advantages of this format is interactivity, since it allows sending real-time information to the television channel, so the viewer can participate in contests, surveys or polls without switching screens or missing the live content. Furthermore, it can provide extra content to the one being broadcasted at the time, such as bloopers, making-off or information about participants in a program.