The EN-206 of PROMAX is a small-sized home modulator that it is able to distribute digital content in high definition or standard definition, by using the existing TV network installation, so there is no need for additional investment. 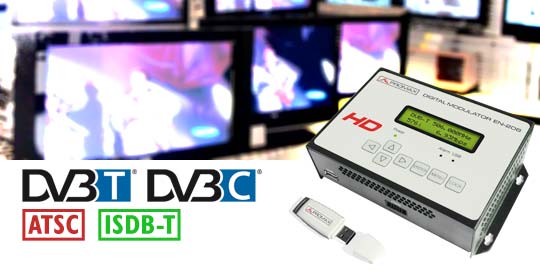 The EN-206 digital modulator should be installed at the beginning of the distribution network. The RF signal coming from the antenna, either digital terrestrial or satellite, free or scrambled,  is connected to the modulator and also some other signal inputs that you want to insert into the network.

The resulting signal at the modulator output is a combination of the digital terrestrial or satellite signal with the additional signals connected to the module. This signal is injected into the existing coaxial network and it will be available for each monitor connected to a RF socket of the network. The signal will be accessible in the usual way, as if it was another channel.

The EN-206 high-definition home modulator has four inputs: 1 HDMI, 1 VGA adapter that allows composite video (CVBS), super-video (S-Video) or component video (YPbPr), an RF input and an input for USB flash drives. It also has an RF output, where the signal, combined and modulated in high definition, is ready for its distribution in the coaxial network.

Inputs and outputs of the EN-206 home digital modulator

The three inputs can be used simultaneously. There is no limit to the number of monitors connected to the distribution network that can display the signal injected by the modulator. Also, if you want to use more input sources, several modulators can be connected in cascade (Daisy chain). For each modulator two new signal sources can be connected.

Compatible with most world standards

Applications are many, for both home and professional use.

A home use example can be seen in the following graph:

From the comfort of his living room, a person is watching the football match, which airs every Sunday. During the break, he changes the channel to check through the small camera installed in a room if the baby is still sleeping pleasantly in his cradle. At this moment the doorbell rings and from the living room, he tunes on the TV to the video interphone channel, and sees that some friends are coming to see the second part of the match. 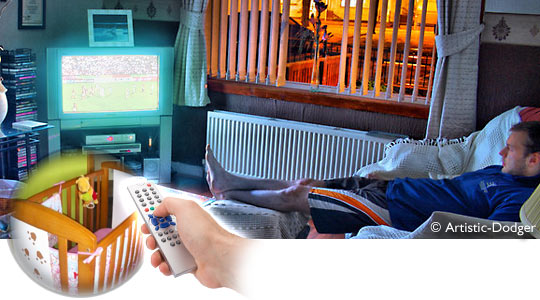 Case Study - Using the modulator in a shopping centre

After the heads meeting in a large shopping centre, they decide to promote a campaign in support of an NGO. The NGO gave them a corporate video on a USB flash drive, which is directly connected to the digital modulator EN-206. The digital signage displays located at each one of the entrances of the shopping centre are tuned to the flash drive channel to play the video. Meanwhile, from the content server (CMS) at which the shopping centre is signed, a new promo is updated and appears immediately on all the monitors within the shopping centre. On the other hand, another monitors that are around the centre show a cultural event of great interest to all.