The PROMAX mobile app connects you to the Hybrid Television

Consumption of multimedia content via the Internet has been growing steadily over the years. It is mainly due to improved data networks that can transmit high-quality multimedia content and the gradual changing of the “analogue" generation for the new “digital” generation.

Due to this growing trend, there are new distribution platforms where the Internet is a way more for distributing content, which is finally played on a TV screen. Various terms are used to refer to these new services such as interactive TV, hybrid TV, HbbTV, DVB-T Hybrid, Smart TV, etc. but not all mean the same.

A Smart TV is a TV that can connect to the internet to access a number of functions normally provided by the same TV manufacturer with its own environment, which often includes web browsing, applications of various types, games or video content.

The HbbTV (Hybrid Broadcast Broadband TV) or also known in Spain as Hybrid DTT is a content delivery system which basically consists in combining traditional reception of programs through the digital terrestrial television with programs on demand and other interactive services received via internet.

Apart from the efforts, systems, servers, etc. which are essential from the side of the service provider, in order the interactive television was possible it is necessary to connect the TV to three different systems and this is especially interesting for the installers: the mains power, the RF signal reception (satellite, terrestrial) and the Internet, which is the system in which we focus below.

Checking the Internet connection for the TV

Our homes can be connected to the Internet through different technologies such as ADSL, optical fibre, cable, satellite... For practical purposes this means that we have a device called "router" that is the "gateway" to the Internet world. We connect to this router through computer network cables or via Wi-Fi. So now we also should keep a connection for our new Smart TV or Hybrid TV.

For this reason it is necessary to verify that the Wi-Fi:

To verify the Wi-Fi signal and diagnose connectivity problems, currently there are <>professional tools for the analysis of wireless networks, such as the PROFI-70 of PROMAX. However, for the specific case of Hybrid Television, PROMAX has developed for installers the application “Hybrid TV WIFI test” for mobile phones and tablets that can be downloaded from Google Play for Android and in a few days from the Apple Store for iOS. This application, which is practical, intuitive and easy to use, is absolutely free and allows the user to perform the tests to check the Wi-Fi signal:

It displays channel and power of Wi-Fi networks detected.

It performs a connection speed ​​test (download and upload) of the Wi-Fi network. 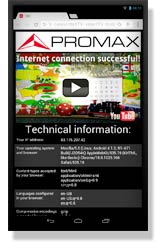 It plays an online test video.