The use of measurements such as BER (Bit Error Rate) for digital system quality evaluation is widely spread. Installers, technicians and engineers of all kinds understand the benefits of having this measurement available in their test meters.

With the evolution of technology, advanced measurements such as the COFDM Constellation are required. The PROLINK-4 Premium are capable of offering new and more sophisticated measurements to help evaluate the quality of digital television, radio or data signals in a better and more precise way. In the environment of DTT (Digital Terrestrial Television) one of this new measurements is the Constellation Display.

The concept of Constellation Display is not new. It exists since the origins of digital data modulation and transmission. It basically consists of drawing in a graphic form (called I-Q diagram) the various digital symbols received over time. The look of the resulting display will depend on the modulation scheme being used and the number of different symbols used to transmit the digital information.

In an ideal transmission channel free of noise and interfering signals, the symbols are recognised perfectly by the demodulator and appear in the constellation display as clear points located always in the same position as shown in the picture. 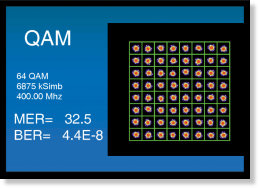 However due to noise and various transmission channel impairments the demodulator fails to identify the symbols in such an ideal way and the points appear more disperse. The following picture shows constellation of a signal affected by noise. The higher the points dispersion the higher the noise.

Digital Terrestrial Television signals use a very complex modulation scheme called COFDM (Coherent Orthogonal Frequency Division Multiplexing). COFDM technique divides the width of a television channel (7 or 8 MHz) in many portions, as many as thousands. Each of those portions is occupied by a modulated carrier, using 16 or 64 QAM like in digital cable TV or QPSK but at a very low symbol rate. Even though the symbol rate used by the individual carriers is small they are thousands in number and therefore the overall transmission capacity is enough to support various TV programs using the bandwidth of a single analogue channel.

Not all carriers in a COFDM multiplex have the same mission. There are three basic types of carriers:

PROLINK-4 Premium constellation display is fast, comfortable and clear and is shown in combination with other global important measurements that describe the overall behaviour of the COFDM multiplex such as CSI (Channel Status Information) or MER (Modulation Error Ratio). PROLINK-4 Premium takes care of all the complexities and technicalities of the process allowing the user for a very easy interpretation with no possibility of error.