If when using a re-emitter, which is working in iso-frequency mode, occurs a coupling between antennas, then the receiving antenna receives two overlapped signals: One coming from the transmitter away from the centre and the signal itself transmitted by the re-emitter.

When the re-emitter is regenerative, due to the processes of demodulation, regeneration of the stream and modulation, the coupled signal has a delay higher than the guard time.

In these cases, the DVB-T demodulator is unable to recover the transport stream. In order to prevent this situation it is necessary to minimize coupling between antennas.

To measure the isolation of the radio-link station in Prades, it is added a frequency pilot tone to a DT-722 amplifier module. That tone has a frequency similar to the re-emitted channels. Then the tone is amplified and radiated from the re-emitter. Due to the lack of isolation, the receiving antenna captures a fraction of the broadcasted signal.

Knowing the radiated and the received power the isolation can be determined: 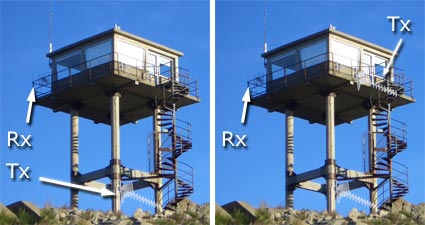 Knowing the power received from the remote transmitter (Rxy) and the isolation (Ixy) it is obtained the value of the maximum power that can be emitted from the re-emitter.

As the DTT demodulator requires a MER of between 27 and 30 dB to operate properly, then it can be assumed that the coupled signal should be at least 30 dB below the signal received from the remote transmitter (Rxy). That is: