The experience of PROMAX in broadcasting and digital television allows it to offer the best solution, technically and financially, to extend the DTT coverage in areas where it is poor or nonexistent.

In the process for replacing analogue for digital television, many municipalities, which already had analogue coverage, have lost TV signal since they are out from the digital conversion. In the particular case of France, the CSA regulatory organization (Conseil Supérieur de l'Audiovisuel) has established coverage for the 95% of the population, so that means that a considerable number of municipalities, due to their location or size, will be out of official coverage. In these cases the CSA empowers local authorities to establish a technical solution to ensure the reception for its citizens.

The town of Prades (Oriental Pyrenees, France) has a cable television network on which are distributed analogue terrestrial television and other contents. After the analogue television switch-off process the municipality will not have digital coverage due to its geographical location.

In this context, the people in charge at the company NEXTWAY, which has been designated by the consistory, has chosen the Digital To TV (DTTV) headend of PROMAX as the solution, both for the radio link and for the redistribution of DTT channels on the network cable (CATV) at Prades.

The solution proposed by NEXTWAY is to install a station on a nearby hill, from where appropriate antennas can pick up DTT signals from a remote transmitter. Then, the station can re-broadcast the channels received to the CATV headend, which is placed in the centre of the town. 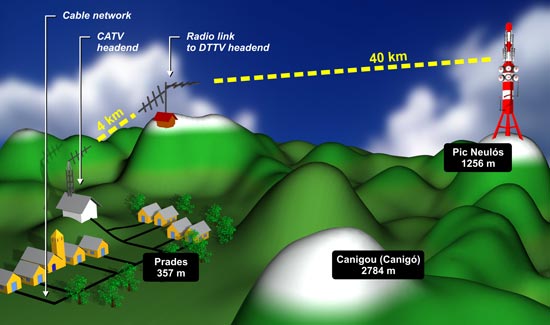 Due to the distance (40 km) and the orography of the region, the signal received at the radio-link station is heavily damaged and the bit-error rate (BER) is very high. This is not a problem for the PROMAX DTTV system because it can regenerate the signal and achieve the same quality than the original broadcasted signal.

The radio-link station consists of a receiving antenna, a DTTV headend and three transmitting antennas. Five DTT channels are picked up from the transmitter station “Pic Neulós” by means of the high-directivity receiving antenna. Then the DTTV headend extracts from each channel the digital data (transport stream), correcting all the errors generated during the transmission and modulating the restored data again in DTT format. The DTT signals obtained, which are amplified by the same headend, are broadcasted towards the town through the transmitting antennas.

The DTTV headend installed as a radio-link consists of three DT-212 units and three DT-722 units. The DT-212 module transmodulates from DVB-T to DVB-T, with capacity for two channels. The DT-722 module mixes and amplifies the regenerated signals.

Three DT-212 modules regenerate 5 channels. In order to optimise the radiated power, the channels are amplified in pairs so are used three DT-722 modules. Each module’s output is directly connected to a transmitting antenna. This arrangement does not need antenna multiplexers and thus prevents the loss of power.

For legal constraints reasons an iso-frequency system is used, that means that the DTT signals are broadcast from the radio-link station on the same frequencies that are received. This requirement forces to place the transmitting and the receiving antenna with precision for maximum insulation and for preventing the signals fed themselves. To further reduce coupling, different polarities are used between the reception and the transmission and also high-directivity antennas. 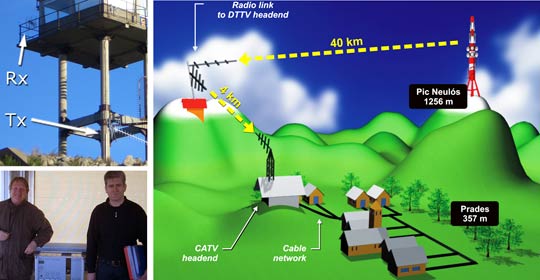 The top left image corresponds to a radio-link station equipped with the DTTV headend. As has been indicated, due to the iso-frequency system is necessary to avoid coupling by spacing the receiving and transmitting antennas. In order to achieve a better insulation, the transmitting antenna broadcasts towards the town using vertical polarity because the transmitting centre of Pic Neulós broadcasts in horizontal polarity. At the bottom right image pictured the technicians of the NEXTWAY company that have implemented the solution for digital television based on DTTV.

At the heart of the town, about 4 km from the radio-link station, there is the cable network headend (CATV), which picks up the signal by using a conventional Vagi antenna. This CATV headend regenerates the DTT signals by using another DTTV system. Then they are injected into the local cable network, ensuring that all users receive DTT signals with the highest quality.

DTTV system allows restoring each stage of the transport stream, achieving the original quality of the transmission because all errors are corrected.

DTTV system, based on a modular architecture, is the most economical solution to broadcast DTT channels in areas where coverage is lacking or deficient. No matter what is the problem, with the DTTV system there is always an appropriate solution to any need.