The residential community Maeva “les Mélezes" located in Alpe d’Huez (France) can now offer to all its french and foreign clients, an exceptional range of over 68 television channels in digital quality.

Until recently, this set of 60 apartments, situated in the heart of the ski resort Alpe d’Huez, was able to receive only 6 analogue national channels and 7 foreign channels, which were received by satellite and re-distributed in analogue. 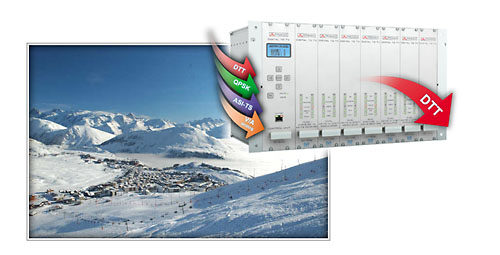 Thanks to the installation of two new digital PROMAX Digital To TV (DTTV) head-ends, now they receive 68 digital channels from the satellites EUTELSAT Hot Bird 13°E and Atlantic Bird 5°W. The channels are injected into the coaxial network of the community, by using the COFDM digital modulation. By this way, in the apartments the flat-screen TVs with integrated DTT tuner can receive directly the channels.

The PROMAX DVB-S2 receiver modules, with CAM reader and ASI output, allow receiving all the channels of the bouquet “Bis TV Collectivités” from the Atlantic Bird 3 satellite, plus the channels from the French DTT. The subscription cards were supplied by Bis TV. In addition to these channels, the QPSK / COFDM modules receive and distribute a large number of free foreign channels from the Hot Bird 13ºE satellite. 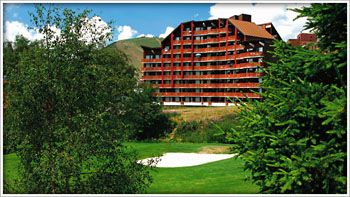 The robustness of the COFDM modulation made possible to distribute the 68 digital services using only 12 COFDM channels, whose frequencies were adjusted in order to temporarily keep the old analogue channels, as the engineers were performing the appropriate action during the installation. Several of the generated COFDM channels are adjacent, without affecting in any way the quality of the signal or image, which is excellent in all the apartments. It was not necessary to make any change neither in the wiring nor in the connectors. Even amplifiers had not to be re-adjusted, because all necessary adjustments were made from the head-end itself.

To minimize the installation time, the configuration of the modules, such as the automatic classification of channels using the LCN (Logic Channel Number), was done by the technician in his workshop the previous day, using a PC.

The entire installation and starting-up was done by the Alpes Electronique Service, located in Vizille, in the province of Izère.