A bit of history

That's it, a bit of history. First artificial satellite 'Sputnik I' was launched 4th of October of 1957 by former Soviet Union. It was about the size of a basketball with a weight below 100 Kgrs but went down in history as the start point for the space age. For three weeks it was transmitting radio signals to the excited scientist on the ground that were gathering fundamental data for the launches to come.

The first telecommunications satellite was Telstar I launched in 1962. Some people refers to Echo I as the World's first in 1960 but it was a passive signal reflector as opposite to Telstar that carried electronics on board like today's satellites. It was also the first to use the modern transponder concept where the satellite 'transposes' the up-link frequency (6,390 GHz in Telstar) to another down-link frequency (4,170 GHz in this case). Telstar I transmitter power was 3 Watts and the antenna was omnidirectional.

The antenna used to receive the test transmission from Telstar I was a huge horn inside a bubble radome 48 metres high.

Only four decades later we have broken all records and we have high power DBS geostationary satellites carrying a lot of digital transponders on board and we start to worry about space junk having thousands of satellites in orbit, plenty of them beyond its useful life. Satellites use highly efficient directional antennas and very high transmitters power, digital transponders, meaning in plain words that we can receive hundreds of TV channels with a small, fix, cheap, 60 cm dish.

Modern broadcast satellites use geostationary orbits. This simply means that they could be seen from the ground hunging in the sky at the same exact position all the time and therefore receiving signals from them does not require complex steering systems. A piece of cake.

All we need to do to receive their signals with the enormous amount of programs they carry is to set up the satellite receiving antenna properly and to ensure that the signals are received with the proper quality levels and here is where the TV EXPLORER field strength meter comes into action.

A professional installer will instantly tell us from the top of his head what to have in the to-do-list if we want to install a satellite dish properly. Surely the list will require us to select the proper mount kit and dish size from the numerous options available in the market, pick a good location for the dish, free of obstacles to the south (in the north hemisphere) or to the north (in the south hemisphere), etc.

Other than the mechanical bits and pieces the dish is made of two clearly differentiated parts, the reflector and the LNB.

The reflector is passive and simply reflects signals from the satellite in such a way that the beam is collimated to the LNB's mounting point. 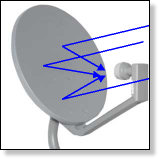 The LNB (Low Noise Block-converter) is an active device fruit of the great evolution of RF circuit manufacturing and includes amplifiers, oscillators and frequency converters in a small low cost package. The first section is made of a device called polarisation shifter that receives one polarisation or the other depending on the supply voltage given to the LNB. This voltage is necessary to supply the active devices inside the LNB.

Modern universal LNB's use mostly linear polarisation and have also the capability to select a different input frequency range depending on a control signal called 22 kHz switching tone which is overlapped with the supply voltage.

In other words our LNB will output a different set of satellite transponders depending on which supply voltage we use.

We can use different techniques to find out where in the sky the satellite we want is located. They can be anything from a pure guessing game to a sophisticated procedure.

The satellites we are interested in are all positioned in a geostationary orbit above the earth's equator. Each of them has a fix given position in that orbit, something like a street number, that we can know from various sources. Orbital position is an important datum so it is commonly part of the name as well.

Websites like www.lyngsat.com or www.satcodx.com offer plenty of useful information about the satellites we are talking about.

For example ASTRA 19E refers to ASTRA satellite which is positioned at 19 degrees East in the orbit. 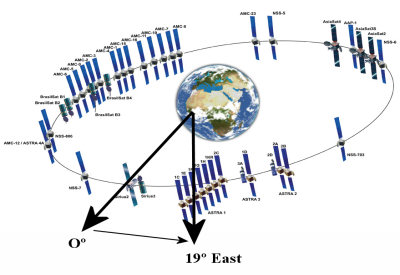 Knowing where we are in terms of latitude and longitude is also easy. We can read that information from a map or even from our car's navigation system if we have one.

With this information in hand we can calculate the elevation and azimuth we should put on the dish to begin our coarse antenna alignment. There are formulas to do that but some websites are again quite useful. This one is especially interesting for you can select the satellite you want and then position yourself on a graphical map.

For example if we take ASTRA 19E and select a location somewhere in Germany:

The required elevation and azimuth for the dish are:

Elevation must be measured from the horizontal level (may be using an inclinometer) and azimuth from magnetic north (with a compass). It is normally more practical to start with azimuth moving the dish horizontally and then look for the elevation.

Knowing what satellite we are on

And the TV EXPLORER comes into action. Our dish is now more ore less looking in the direction where we presume our bird is parked. With the TV Explorer connected to the output of the LNB we select satellite frequency range (

), span of 200 MHz and set the power supply voltage to one of the possible values (

). We will take for example 13 VDC, which will take us to the VERTICAL polarisation and LOW band. We can use 80 dBµV for the reference level for we can change that at pleasure depending on the amount of signal we get.

Something will come up on the TV EXPLORER screen. It will normally be a weak signal that may come from the desired satellite or from the neighbour ones for the dish is not properly tuned up yet. Swing the dish slightly horizontally and vertically until a decent signal is shown on the screen.

There we have a satellite but which one is it? Most probably the signals we are looking at are digital transponders from the unknown satellite. The TV Explorer can be operated in frequency or channel modes. 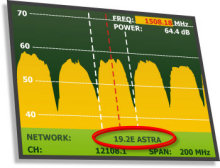 Tune any of those digital channels in frequency mode using the rotary knob and the markers shown on the screen and press the AUTO ID key. The TV EXPLORER will tell you what satellite and/or orbital position you are on in a matter of seconds!

If we are unlucky and this is not the satellite we want then we only need to move the dish slightly to pick the signal from the next satellite and repeat the process.

Once we know for certain that we are on ASTRA 19E it is time to make fine adjustments to the dish to optimise the alignment. There are two goals to achieve. On the one hand we want to receive the maximum amount of power possible and on the other hand we need to make sure we minimise the interference from the crossed polarisation. 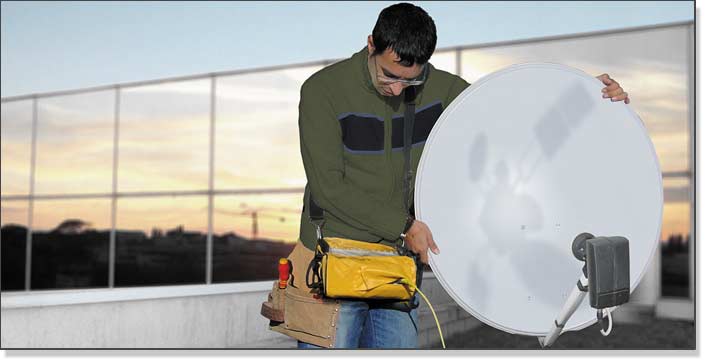 In order to maximise the received signal power we need only to move the dish's azimuth and elevation very carefully ensuring that the display of the spectrum analyser show us the highest values possible.

As you move the dish's position you will see the signal change on the spectrum analyser like it is shown in the picture.

Cross-polarisation is adjusted by rotating the LNB on its axis. As you do so you will see on the TV Explorer screen how the channels interfering from the opposite polarisation go up and down the objective being to leave the LNB in such a position that those channels are as low as possible.

The TV EXPLORER field strength meter is the ideal instrument for quick and effective checks of signal quality not only because it shows all measurements in one single screen but also because the meter doesn't require bothering configuration processes.

Once we select the desired table, ASTRA 19E in this case, we can browse the channels at once. There are channel tables grouped by polarisation or band or those with all channels in the satellite.

Look what we've got

The TV EXPLORER can also display the free to air programs available in the satellite. That is very practical not so much for the picture itself but for amount of interesting data related to the transponders we can display as well. This includes:

At any time it is possible to display the SERVICE LIST, by pushing Encoder button, and show all the programs and services available within the tuned channel. Selecting one particular channel or service becomes very intuitive using the encoder and/or the arrow keys.

Here we are measuring signals broadcast from a modern satellite using a piece of test equipment. Funny enough they both share a lot of things in terms of technology.

Li-ion batteries were used in spacecraft because of its reliability and capacity/weight ratio.

High frequency switches are used in satellites because of its reliability compared to the mechanical types.

If you have tried to align the dish with a conventional meter instead of the TV Explorer, you must be sweating by now, your back akes, you feel the weight and need to drop the meter to rest. Don't worry. You are not under the effects of a sun pain. You just don't have a TV EXPLORER!